Somehow there’s comfort to be found in the fact if you’ve gotten thru your play once on its feet. Still pretty hobbly, and lots of stuff to be sorted, but it’s like the first time you’ve cut thru the jungle with your machete. I try not to do it too quickly, lest you make a wrong path, but there’s still a moment of relief once it’s done.

With “wrong” I mean a solution that “works”, but hasn’t fermented at all, is too easy, comfortable all around. Sometimes it’s a good thing, when something doesn’t fit right away, as it means that new paths are being created. We all have our comfort zones, directors and actors alike. And it’s a challenge for us all to recognize them and then move past that. It’s not pleasant, rather what a friend called AFGO – another fucking growth opportunity. But it’s what makes things worthwhile. 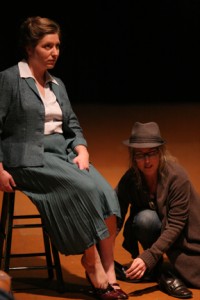 We also had our publicity shooting this week. Karen, our costumer, did her best to get a first take on our costumes ready for that night, and we ran two scenes for Randy’s friend Jim, the photographer. Since one producer told me I should absolutely make sure that there were pictures also of the actors with me the “in charge” director and producer, to build my brand, I put my self into a green top, popped in my contacts and added some lipstick. Then I told the photographer that I’d need something like that too.

Anyhoo, I put on my stiff upper lip, and said yes, kinda, and Jim was nice enough to indulge me. Now here’s the rub. 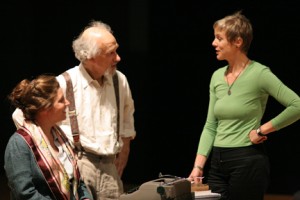 I’m not terribly photogenic at the best of times, and it takes about a zillion shots of me, and a lot of “feel good” time to get me to a picture that is worth something. That evening wasn’t it. However, while I was standing next to David and Lisa, awkwardly clutching my notepad, deciding where to focus, David started talking to me. “I know this is really difficult, but let me ask you this…” and talked to me about something completely different. It worked. Out of the bunch there is one picture that I can really use for that particular purpose. I was very moved at the empathy. Most people don’t readily tap into the fact that I’m actually a bit squeamish when it comes to attention of that ilk. Yes, I can stand in front of a crowd and talk – dealing with choruses will teach you that – but when it comes to myself, I find that really hard. So, thank you, David. Now back to your narcissistic Ezra Pound persona!