What could be more theatrical than devising a piece on the sexy topic of Equal Pay in Liechtenstein?! Exactly.

In co-production with the LANV, the Employee’s Union Liechtenstein, the junges Theater Liechtenstein, has commissioned me with creating and directing a solo piece, that explores the complexities of pay structure for employees. Why it is, that while young men and women start off on a semi- equal footing, as life happens, men will move up, while women lose traction.

I embarked on research, we created a questionnaire that was completed by teenagers on the threshold to starting their work lives, and adults in the middle of it. What we found was highly interesting, but data doth no theatre make. 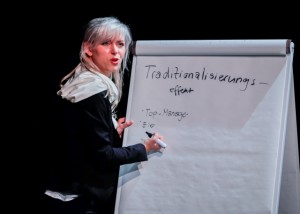 WAS BIN ICH WERT?! has the frame of a lecturer visiting a school, but she gets highjacked by five other characters who live inside her and also want to express their opinions on work, pay, and what does a good life mean. The voices are an adult man, an adult women, a female teenager, and a male teenager. Then of course there´s Anarcho Girl, who just wants to wreak havoc and breaks into song and dance.

I found a congenial partner in actress and collaborator Jessica Matzig, and together we created a piece, that is fun and informative in equal measure.
We had a premiere just with press on February 27th, then filmed it on February 28th, performed it in front of one test audience of high school students on March 24th – they were highly engaged and eager to discuss (success!!) – , and as soon as things open up further, WAS BIN ICH WERT?! will travel through schools all year. The official opening night will be held on February 23rd, 2022, celebrating one year late the 50 year anniversary of the LANV.
Weird COVID way of doing things? Yes, but also incredibly privileged and lucky, as we were able to rehearse and develop in a theatre space, 6ft. apart yet together.

Die Künstlerbrille® – Through the lens of the Artist

The project KÜNSTLERBRILLE®, created by Dagmar Frick-Islitzer, aims to present the work of artists of different genres – visual, musical, theatrical, literary – while also teaching the ways artists go about their process. Creatives employ different ways of thinking than other professional fields, and KÜNSTLERBRILLE believes that these approaches have a lot to teach. The result is a traveling exhibit that includes artistic works, interviews with the artists, and also a “teaching course”, a kind of show-and-tell for the viewers to experience something of the creative process themselves.

I work in theatre, and together with actor and writer Christiani Wetter, we came up with a “work” and a “karaoke station”, that may give some insight into the theatrical process, focusing on the term PERSPECTIVE.
Macbeth, Act 1, Scene 7, in which Lady Macbeth (Christiani Wetter) convinces the reluctant Macbeth (Nicolas Biedermann) to more forward with their plan to murder Duncan. The scene allows for many different interpretations, depending on how you view it.
The work: The viewer views three different filmed interpretations of the same text.
First,  a “conventional” approach to the dramatic dynamic and the characters with Christiani Wetter portraying Lady Macbeth and Nicolas Biedermann as Macbeth. The second version switches the genders, and the last iteration is an updated scene in a contemporary setting, the characters based on the central power dynamics, conceived through improvisation.
The karaoke station: The viewer can play Lady Macbeth or Macbeth, performing the scene with the actors reading the part of the scene partner. Non-theatrical audience can play at being an actor and see for themselves how many ways there are to “be” and speak as another person.

The exhibit opened successfully on  August 11th, 2020 at the Kunstraum im Engländerbau in Vaduz (Liechtenstein), then travels to Haus am Lützowplatz in Berlin (Germany), where it was presented via a virtual tour. Its next stops are the Bildungshaus St. Hippolyt in St.Pölten (Austria), and the Südtiroler Landesmuseum für Kultur- und Landesgeschichte Schloss Tirol.