Since my computer died, which – I swear to God – will have been my last PC, I’ve had several opportunities to  trundle up to the Grand Apple store in  Grand Central. 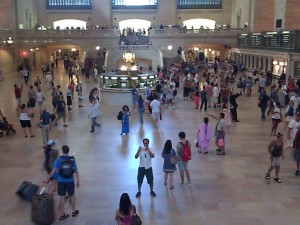 Every time I climb up the steps, I turn around and pause to look at the masses of people down below. That said, “masses” is not the right word at all.  Mass, singular, isn’t correct either. Even on a busy day, the many people are clustered in different formations. They are either standing still in a line, as in front of the various ticketing stalls, or they are in smaller groups around the central clock. Some are waiting to meet up, some are simply standing in the middle of the hall, looking up at the magnificent ceiling, hopelessly snapping pictures with their phones at the beauty up high, or they stare frowning into maps or books or phones. Around these smaller configurations you have the milling crowd: streams coming in and going out from all sides, from above and below, the dining concourse.

I watched this going on for some time, etching the dynamic into my mind for the next time I have to stage a complex crowd scene.  I’ll need at least four subsets of different movement or standing patterns to make it look convincing, aka “real”. That was a revelation.

We tend to think in binary terms: people are either singular, individual, and have one mindset  – also politically speaking -, and then we have the mass, which behaves in a completely different way. But unless there is a strong galvanizing force, say an emergency, or in a more benevolent case a theatrical event, out of a large number of people, we need to “create” a unity out of little groups.  From the problem of creating on stage a convincing crowd, a logical next question for the theatre person is how to create a unified crowd out of disparate groups in the audience. What galvanizes viewers into becoming one? A charismatic  performance, a compelling story line, a striking visual? All these elements contribute to this, and as theatre makers we strive to make them all as arresting as possible for the attention to be focalized, but when it happens, it always feels like magic.

Are there tricks? Well, the savvy director/producer knows that if you have a small house you seat them together, as closeness enables the forming of a “company”. You try to generate an audience “ensemble” as much as you want to create that quality in your cast. A big aspect of the rehearsal process involves “creating an ensemble”, a trusting group of performers, who can play together, even if their characters rip each other to shreds. That same energy is desired in the audience.

As we seem to move apart as a society, I see more and more shows that immerse their audience in an experience – Sleep no more as a case in point- , or have the actors engage with the audience before the show, during intermission, eating and drinking together – The Seven Sicknesses – or even the experience people have who buy tickets for Wagner’s Ring Cycle at the Bayreuth festival in Germany. You can’t get tickets for each individual opera, you have to commit to the whole four-evening endeavor. And every night you have the same seat, and every night, therefore, you have the same neighbors. I’ve witnessed it over and over during my four years working there that people will inevitably connect. By the time the gods go down in Götterdämmerung, friendships (and hostilities) have formed in the audience, the production has been dissected between them while everybody has endured the same hard seats (acoustics be damned!),  and you experience something like the origins of theatre, sprung from religious ritual in Greece. Community. But community not as a starting point, but as an end point, an achievement of unity out of disparate elements. Like that crowd in Grand Central, which in small groups have their own agendas and stories. It’s an effort to come together, and not always pretty, be it in rehearsals, in the theatre with a sweaty neighbor, or in conflicts mundane and/or political. But it’s worth the effort, for when community happens, it’s a wonder, it’s communion.