After a successful run at the Edinburgh Festival Fringe in 2014, we became audacious and took St Joan to London, at the Courtyard Theatre, to the Dublin International Gay Theatre Festival, and then for one amazing performance at Gasometer Triesen, in my home country Liechtenstein. All the reviews were fabulous, and we even got “standing aviations” as our stage manager called it.

See a clip of it HERE!

What was different? Well, one actress, Samantha Pearl, took over the role of Joan 3 from Géhane Strehler, and added her own unique bouncy energy to it. Julia Pascal wrote a new scene, emphasizing the lengths Joan went to to protect her virginity from the men who thought that this was the source of her power, and I redevised a couple of scenes and changed the order of others. That was our part. But the big shift was political.

Charlie Hebdo happened, and the rules of violence around what is PC, acceptable, who is at home where and what race are we and religion suddenly acquired even more poignancy than the year before. St Joan is sadly now a play more topical than ever, and all of our audiences responded strongly to its message of tolerance and its call for celebrating our differences rather than trying to annihilate them. 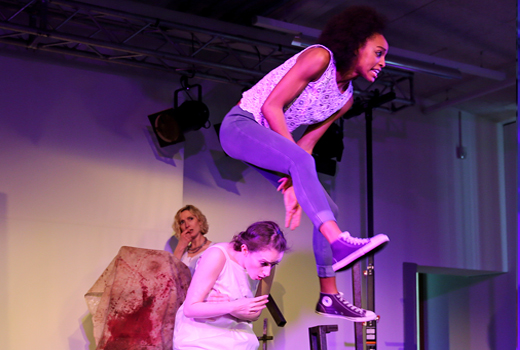 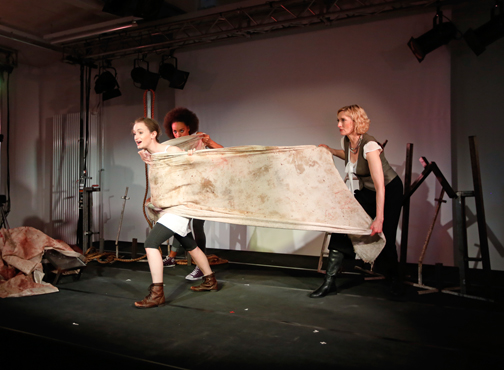 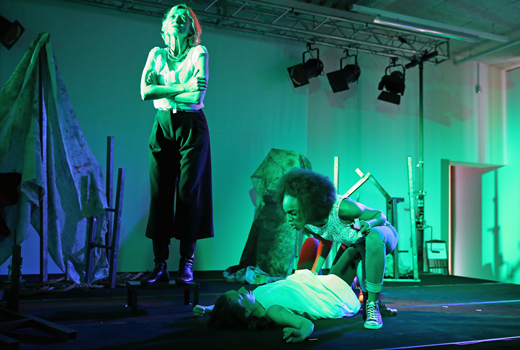 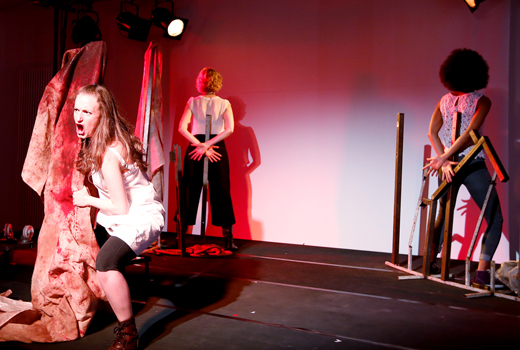 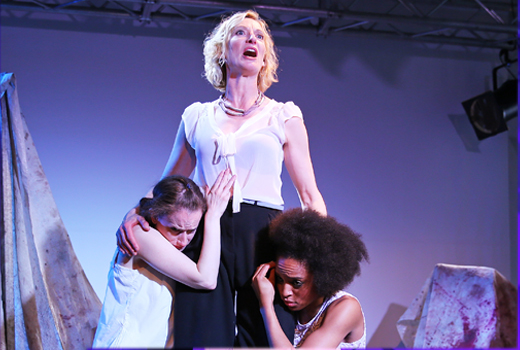 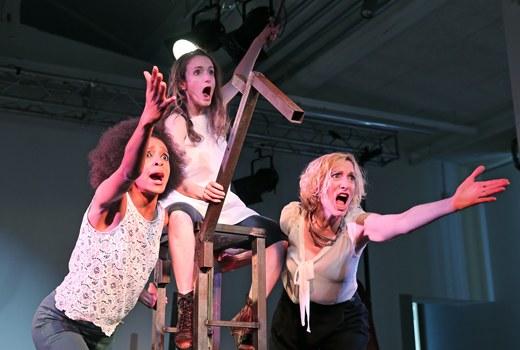 Press
Director Katrin Hilbe and writer Julia Pascal collaborate to bring a well-balanced display of several themes: power (as a blessing and curse for women), national identity, and race. Hilbe’s often bold stage direction that saw Joan presented as a sexual commodity and subsequently assaulted, combined with Pascal’s fluent mentions of ‘breasts’ and other female icons from the Queen to Eve, made me appreciate Joan not as a warrior but as a woman. Both Hilbe and Pascal remained true to history in representing Joan, but the focus appears to be heavily emphasised on her position as a woman. Femininity ran throughout the play and was most tantalising during some of the more violent scenes. Joan of Arc was a woman, which is what I understand from this play. Hilbe and Pascal thread this theme so consistently throughout the play that it is near impossible for me to interpret St Joan in any other way.
Marcus Emmanuel, A Younger Theatre

Everything about this evening was exceptional. Firstly: exceptionally good. An unusual location for theatre, which revealed itself as an ideal and intelligent choice by the director: the Gasometer’s intimacy and its team, open to courageous experiments, created the space for a chamber theatre requiring closeness and creating it. Three actresses, which have just been given awards as a trio in Dublin for this production, as best female performers (and one award for Katrin Hilbe for best directorial work) Juliet Dante, Rachel Halper and Samantha Pearl are an event which saddens only in one respect. When again will we see in this region any other three so professional and in the best Anglo-American theatre tradition schooled women, who celebrate precision, dynamics, sensitivity and wicked humor?
Klaus Koppe, Liechtensteiner Volksblatt
This is a visceral production which will hopefully be seen on the Dublin stage even after the end of the International Dublin Gay Theatre Festival, of which St Joan is a part of. This short play is a fast paced, eloquent and well directed, keeping the narrative moving without ever losing the audience. It is a highly amusing and physical performance that is not to be missed.
Laura Marriott, TPR Ireland
The audience was challenged but not overwhelmed, emotionally moved and captivated. The intensity and power of the performances by the three women is exemplified in the scene in which Joan describes being burnt at the stake, how it feels to burn alive. The audience, at this point completely engrossed in her story, was feeling the same and shuddered at the experience.
Gabi Eberle, Liechtensteiner Vaterland
Here is a director at work who learned her craft from the ground up. She knows how to improve on already good foundations and in all modesty succeeds in achieving far more than what is usually seen at a theatrical event.
Klaus Koppe, Liechtensteiner Volksblatt