Timely, sadly timely. On a sunny weekday afternoon, Jim Bender sees a teenage boy approach the entrance of the local high school, AR 15 beneath a trench coat. In a moment’s decision Jim pulls his own firearm, stopping a shooter-massacre before it happens. Jim Bender is a hero. But as the full story is revealed, this truth becomes a lot less clear – and that is not what people need it to be.

The play by Minneapolis based writer Sam Graber explores the correlation of our gun culture and the fragile state of the male identity in our world. Shooter tells the story of three long-time friends and a prevented high-school shooting.

+ member of SDC
* courtesy of AEA

Photography:  Carol Rosegg except photos 2 and 9. These are by Katrin Hilbe. 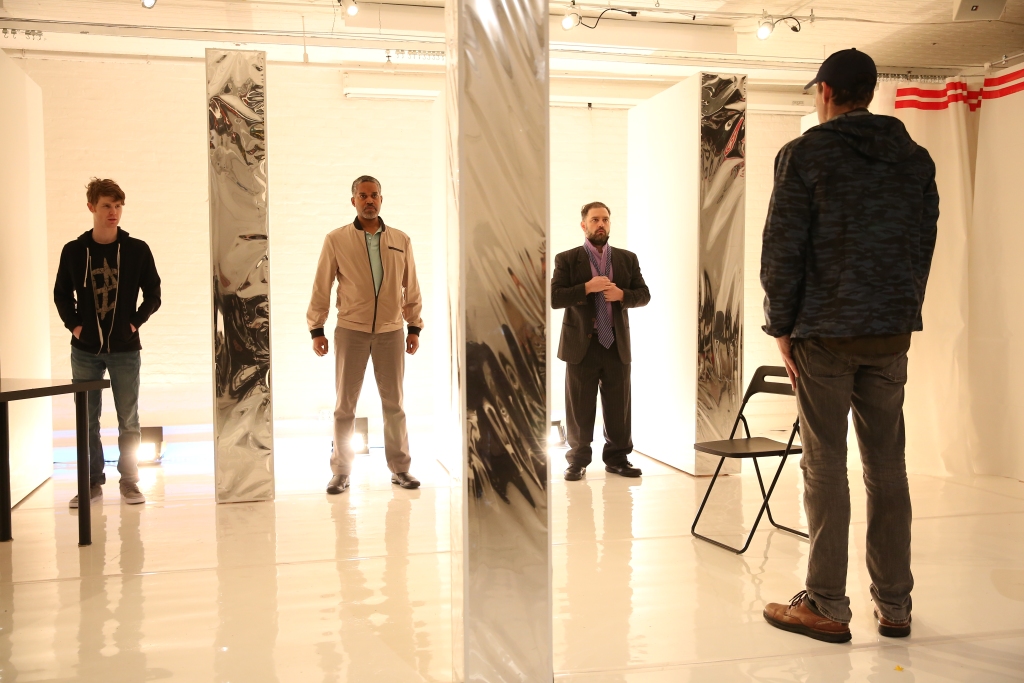 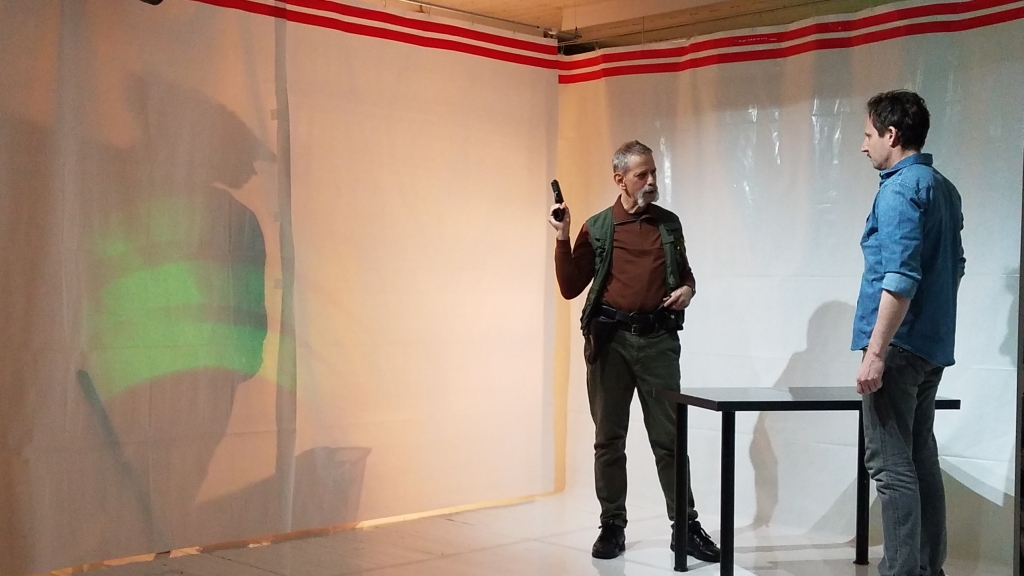 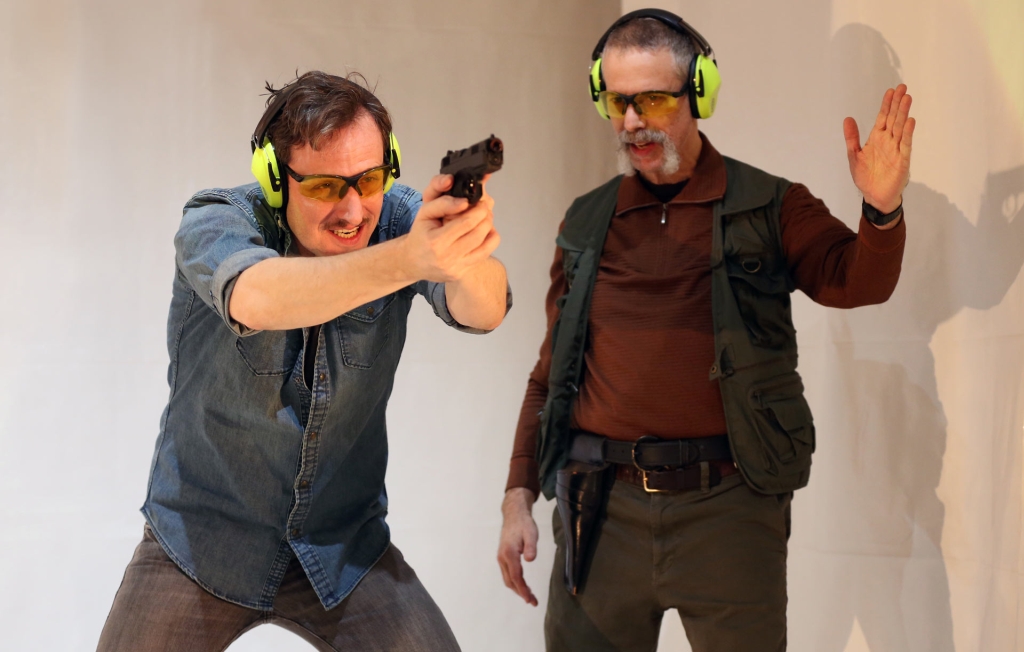 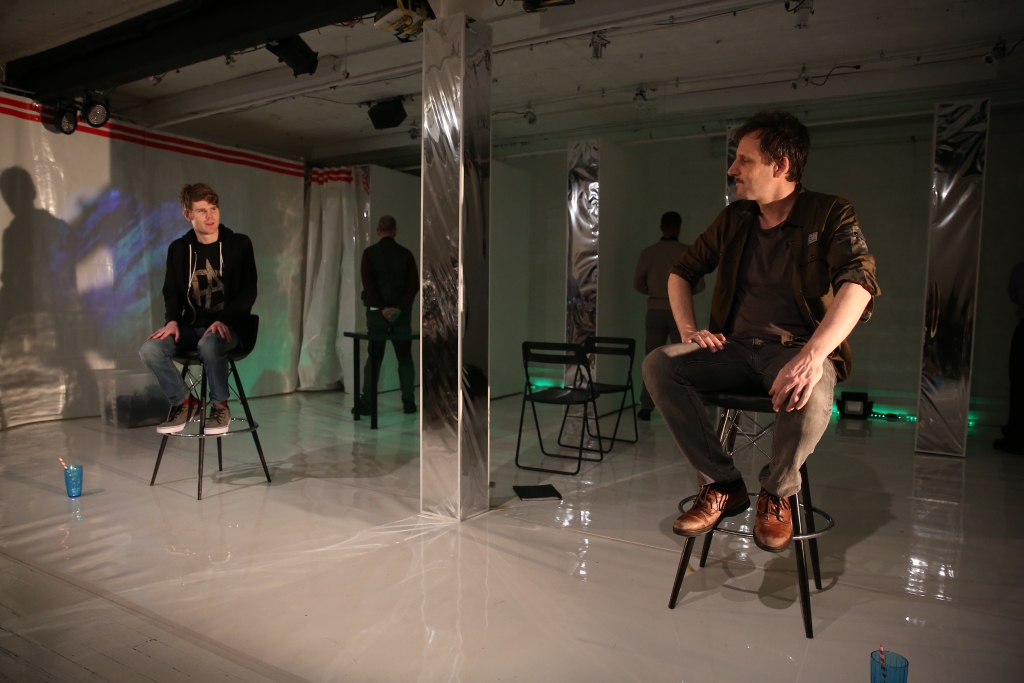 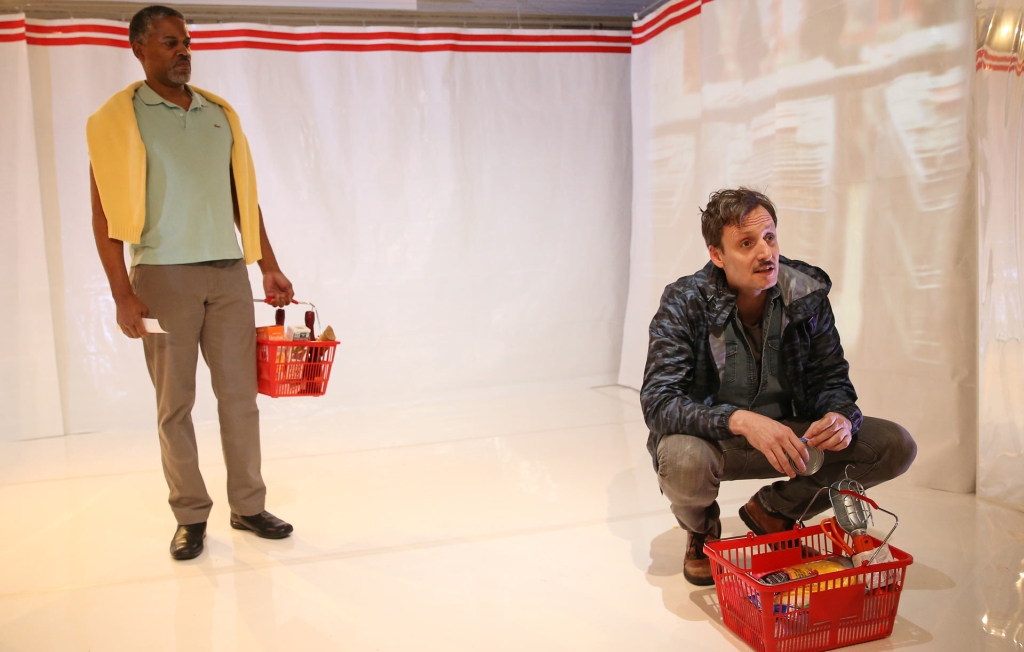 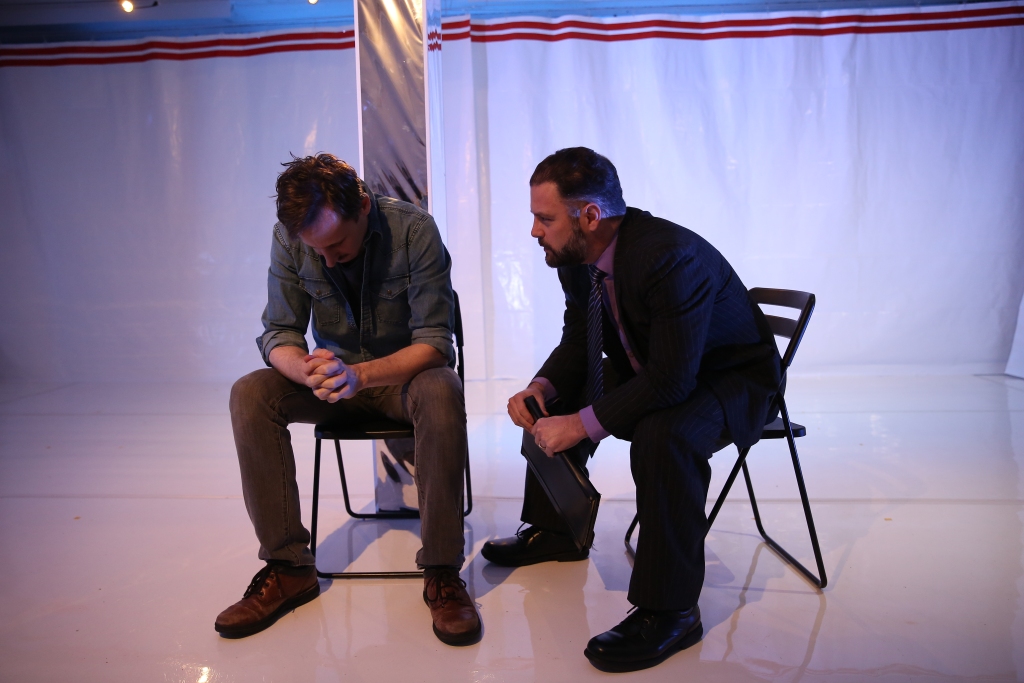 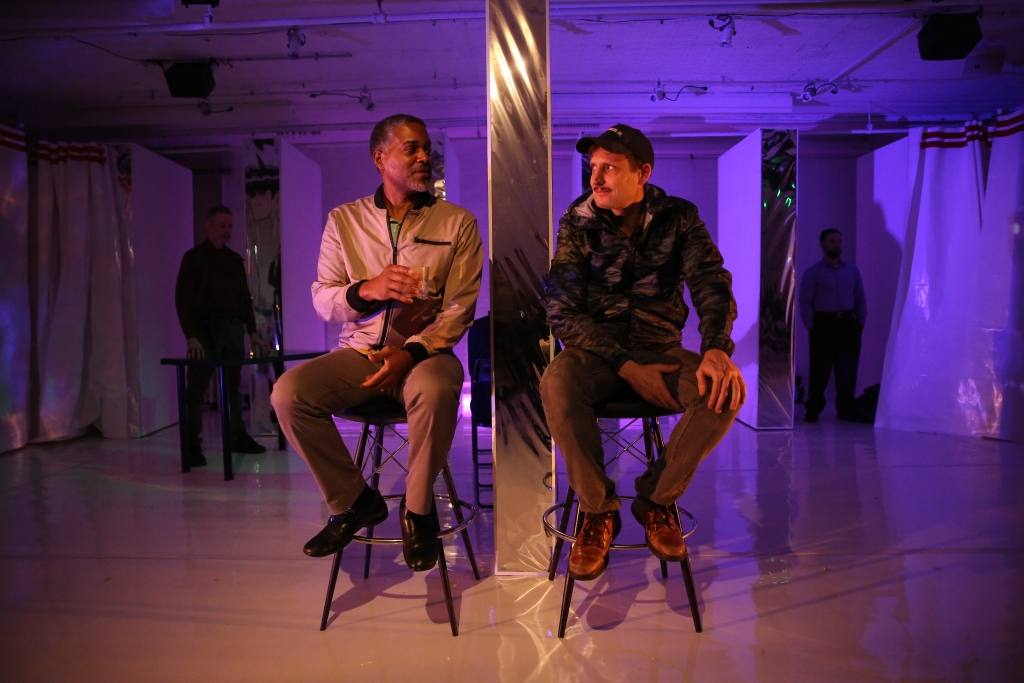 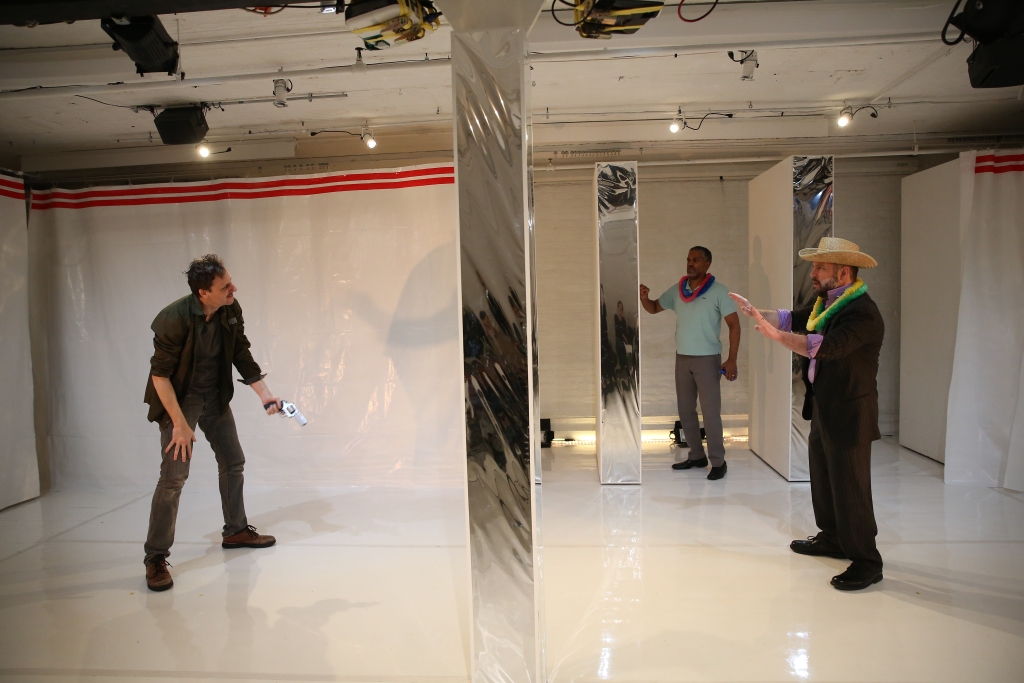 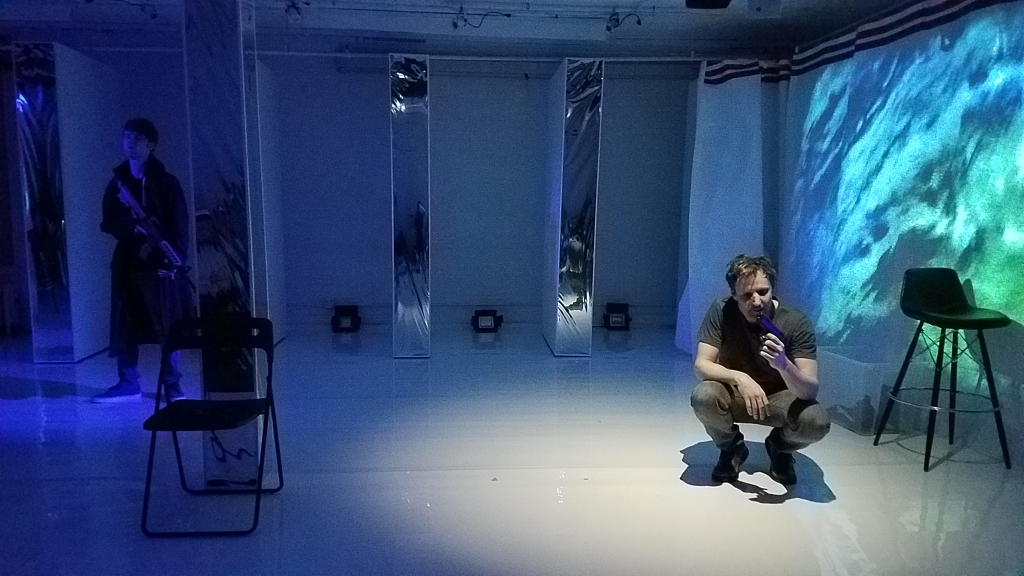 Press
"Director Hilbe masterfully weaves dramatic moments together, careful to keep the five actors each in his own character. In terrifying moments where lives are threatened and a brave man intervenes to prevent yet another school massacre, we are fully aware of the danger and yet moved by the men who are involved. To pull off subtlety in the midst of chaos takes a deft touch like Hilbe's. "
Susan Hall, Berkshire Fine Arts

"The presence of so many firearms, and the fact that they are often pointed directly at the audience — by director Katrin Hilbe’s order — is potent. It is hard not to flinch when facing down the barrel of an assault rifle, even when you know it’s made of plastic. Such semiotics make Shooter‘s audiences violently uncomfortable, but in a necessary way. These guns on stage are the power of theater at its most fundamental: the ability to take a representative object and imbue it with the power of the real thing. (...) When the Parkland shooting took place on Feb. 14 of this year, director Hilbe noted how parallels in current events affected the show. 'We have two people in our cast who come from the vicinity of the Parkland school, so it really resonated,' she explains. 'We felt at least we’re participating in the conversation as artists with what we can.'"
Stephen C. Smith, The Clyde Fitch Report
"Katrin Hilbe directs the show meticulously, on a bare stage screaming with violent white walls and floor. She presents Jim under a theatrical microscope but the presentation never looks forced."
Steve Capra, New York Theatre
"The story flits back-and-forth between the lead-up and fall-out of the foiled massacre in a way that mirrors the retrospective search for missed warning signals that has become ritual in the hours and days after school shootings (the director, Katrin Hilbe, helps keep this chronological confusion to a minimum through distinct shifts in staging)."
Gabe Cohn, Exeunt NYC