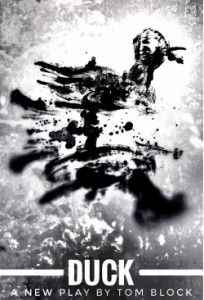 Duck (Billy) has reached the end of his rope and only communicates by quacking. After a career in the CIA, which has led to a downward emotional spiral, he finds himself on a park bench, which happens to be the home of his older brother Crumb (John), who was also once a CIA operative and Duck‘s colleague. Crumb lost faith in the system, leaving his younger brother to kill for reasons of state while he, Crumb, dropped out of society. The play is an exploration of Duck’s path, from faithfully patriotic to psychically distressed and unmoored.
TEAM:
Director: Katrin Hilbe+
Scenic Designer: Jefferson Ridenour
Lighting Designer: Joyce Liao
Costume Designer: Cathy Small
Sound Designer: Andy Evan Cohen
Stage Manager: Perri Sparano 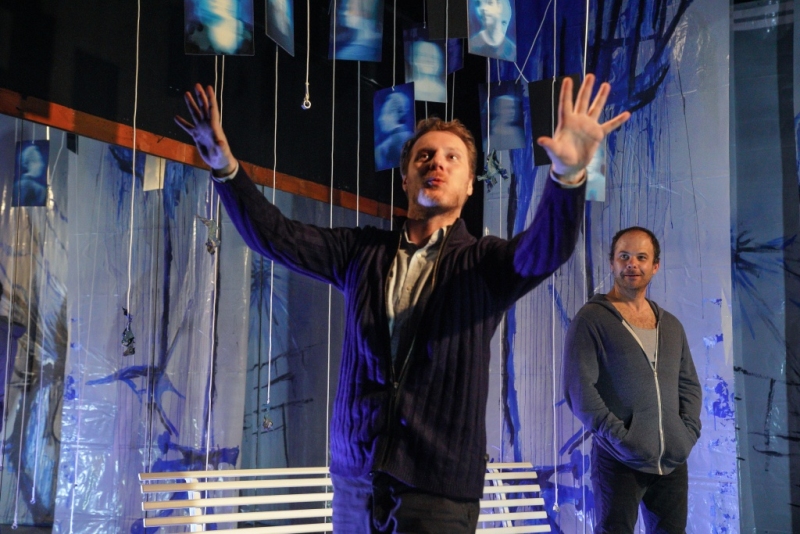 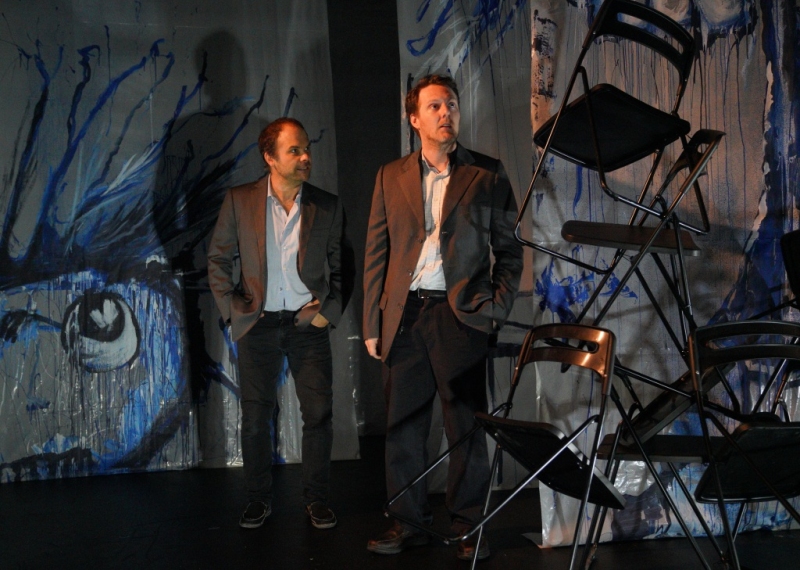 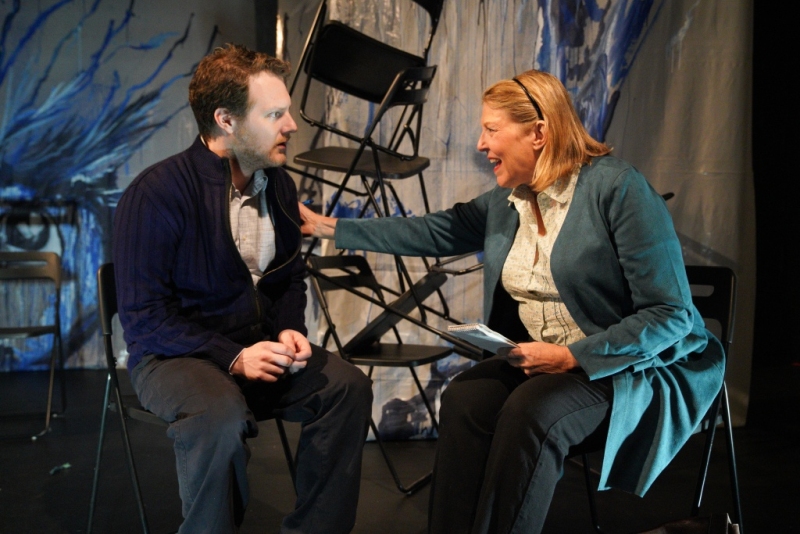 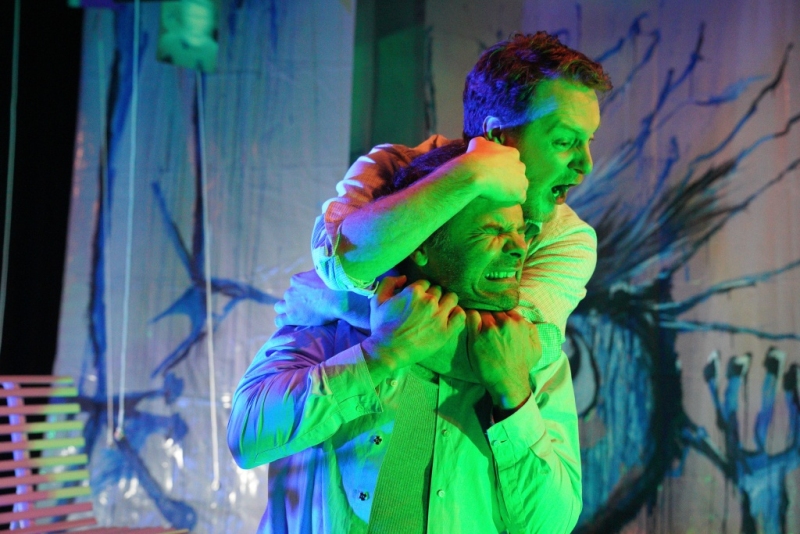 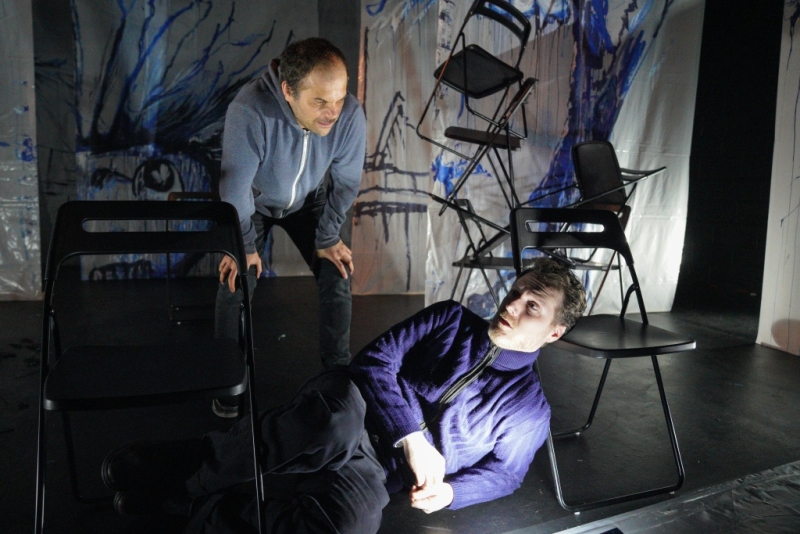 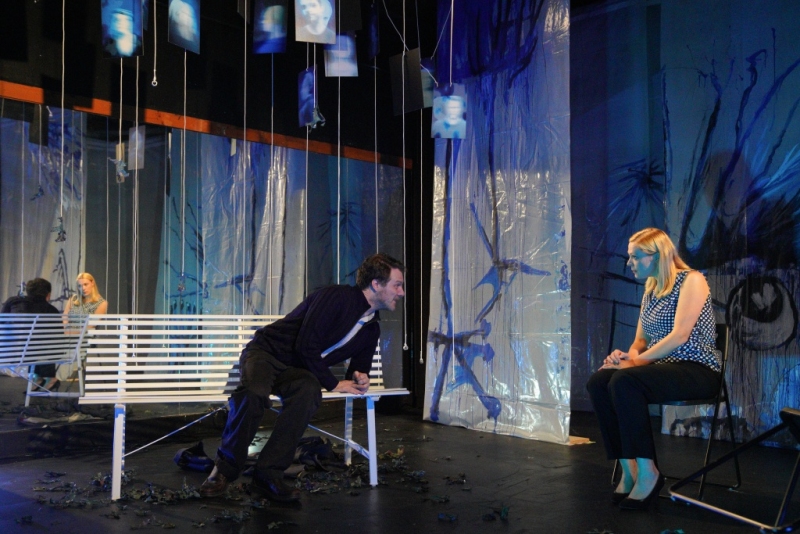 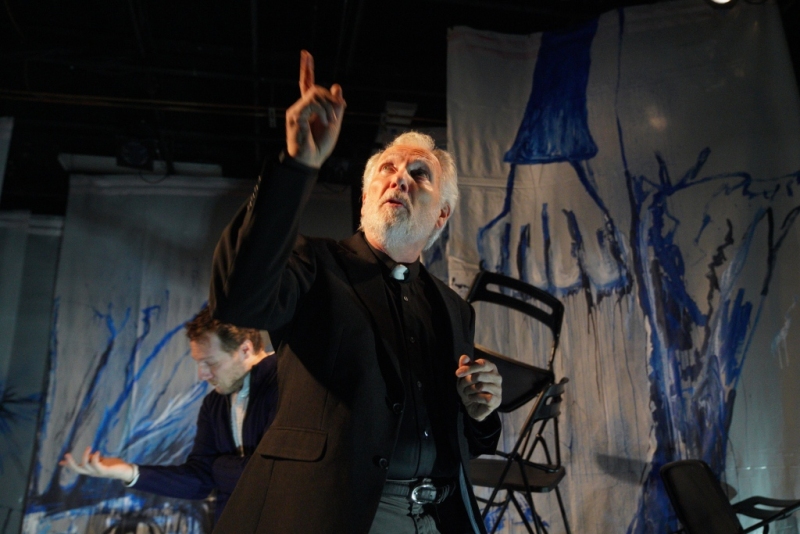 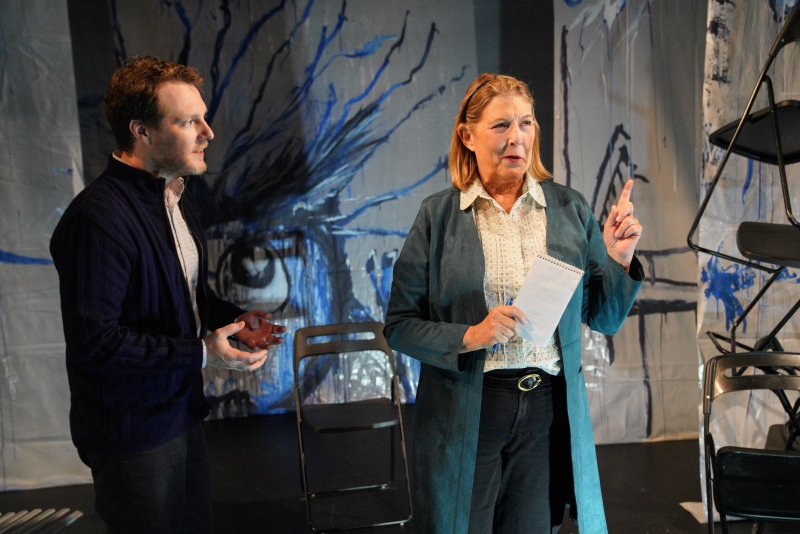 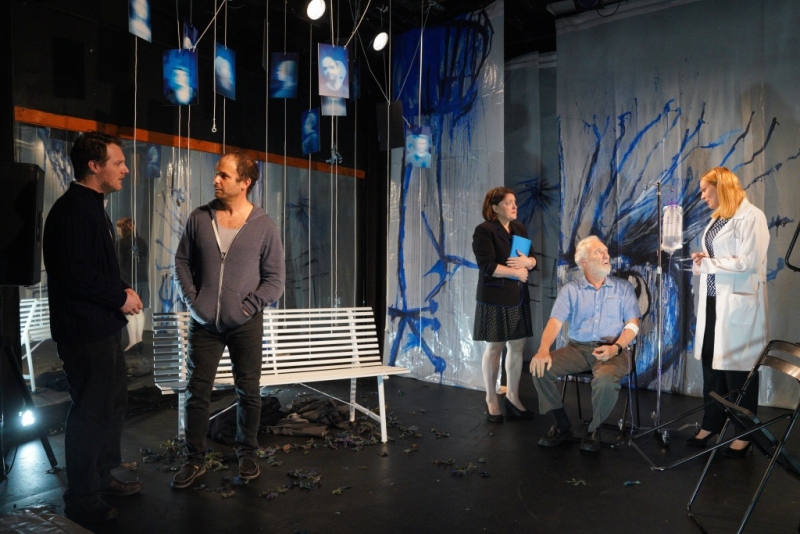 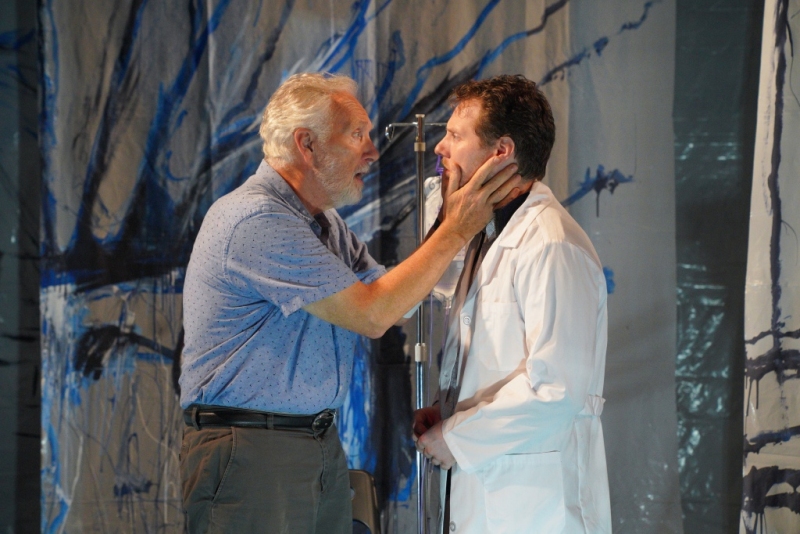 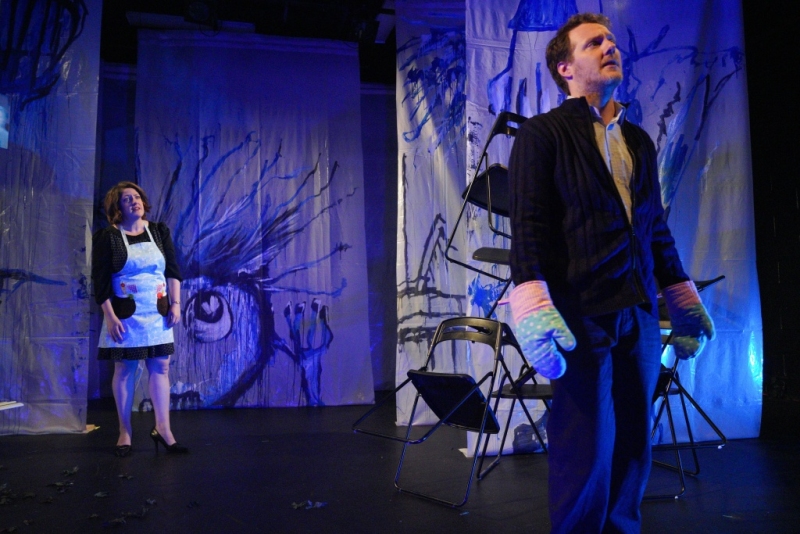 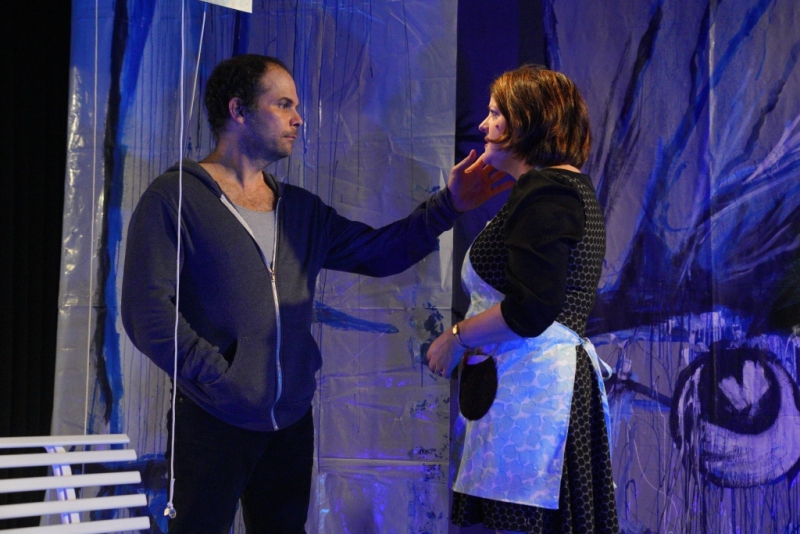 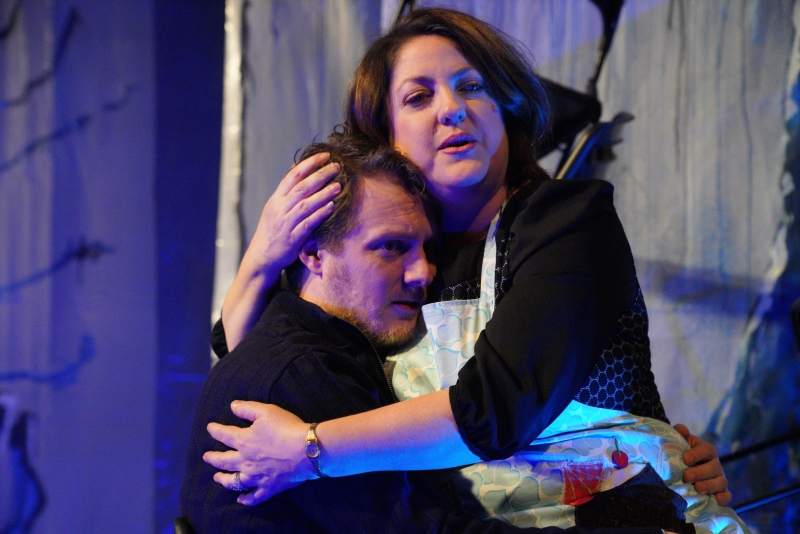 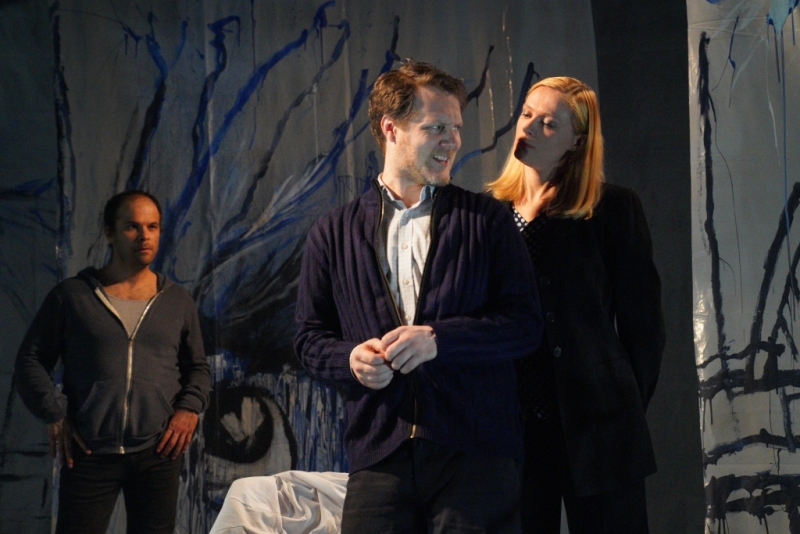 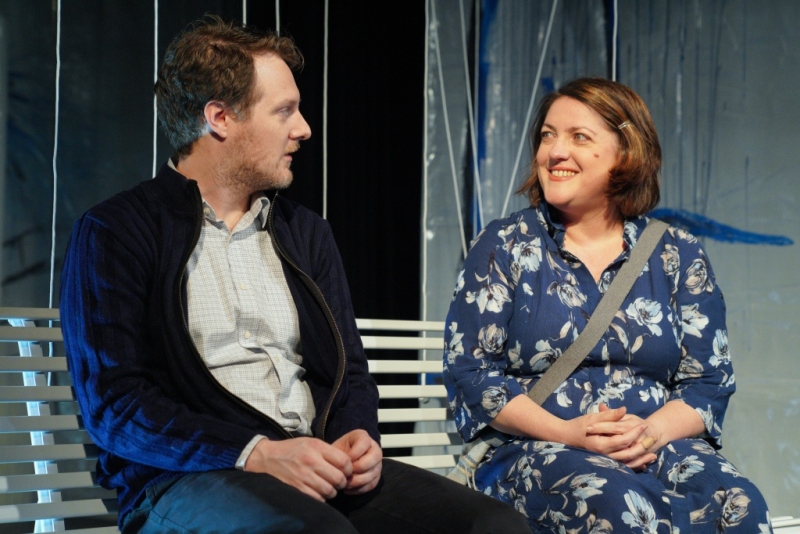 Press
"Director Katrin Hilbe and her cast make excellent use of the IRT theater. Jefferson Ridenour’s dramatic, handpainted, blue & white draperies delineate the space, while adding a vaguely chaotic dystopia that’s fully in tune with Duck’s mindset. Clever sound and lighting effects allow the action to proceed seamlessly, with a special mention for Cathy Small, who did the costumes. Three actors (see above) played five parts, and the action never flagged as they moved in and out of their costumes. In a play that doesn’t stop, that’s a considerable achievement."
JanEwing, Hi!Drama

"More than once in the last three years, I’ve been stunned into silence by the rabid stupidity coming out of Washington. “Quack! Quack! Quack!” says Duck-1. “Quack! Quack! Quack!” Moscow-1 echos back. The White House and Senate might as WELL be quacking, considering the total lack of substance and intelligence coming out of them (I’ve frequently wondered what William F. Buckley would be saying about these political cretins). Duck made me think anew about these important things, from a slightly different point of view. That’s what good theater is supposed to do, make you think, and I’m happy to say that this small, intelligent play does it very well."
JanEwing, Hi!Drama
"Duck is darkly funny and often disturbing. Directed with a perfect sense of pacing by Katrin Hilbe, we see a modern version of our brother's keeper."
Susan Hall, Berkshire Fine Arts